I’m pretty proud of myself for  keeping up with posts and allowing myself this creative outlet. In that spirit, I thought I would establish a TBR for the graphic novels and mangas on my shelf. I find it refreshing after a long book to switch it up and have something that’s a little shorter or a different genre to sort of clean my reading pallet; I think comics, graphic novels, and mangas are perfect for the job! They are pretty quick reads, and are obviously more visual in comparison to traditional books which keeps reading fun, light, and unpredictable! These are out on loan from friends so thanks to those guys for the recommendations. Let’s get crackin’! 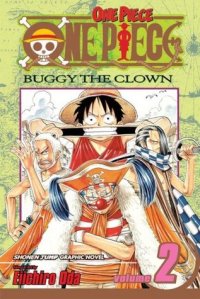 One Piece by Eiichiro Oda Volumes 2-6

As a child, Monkey D. Luffy was inspired to become a pirate by listening to the tales of the buccaneer “Red-Haired” Shanks. But his life changed when he accidentally ate the fruit of the Gum-Gum Tree and gained the power to stretch like rubber…at the cost of never being able to swim again! Years later, still vowing to become the king of the pirates, Luffy sets out on his adventure…one guy alone in a rowboat, in search of the legendary “One Piece,” said to be the greatest treasure in the world…

PIRATES! I read Volume 1 of this manga series earlier this year and I have 1-6 on my shelf on loan from one of my best friends who is a HUGE One Piece fan. I have to at least read the ones he lent me or suffer him shaming me until the end of time. 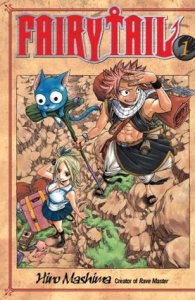 Celestial wizard Lucy wants to join the Fairy Tail, a club for the most powerful wizards. But instead, her ambitions land her in the clutches of a gang of unsavory pirates led by a devious magician. Her only hope is Natsu, a strange boy she happens to meet on her travels. Natsu’s not your typical hero, he gets motion sickness, eats like a pig, and his best friend is a talking cat. With friends like this, is Lucy better off with her enemies?

Wizards, pirates, a hero with flaws, AND a talking cat?! Sign me up! This is another stack that I have on loan from the same friend. It seems super fun and I’m excited to start the adventure, but I’ll probably finish One Piece before starting these. 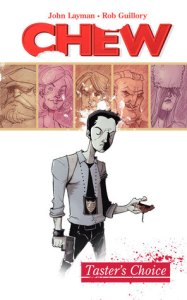 Tony Chu is a detective with a secret. A weird secret. Tony Chu is Cibopathic, which means he gets psychic impressions from whatever he eats. It also means he’s a hell of a detective, as long as he doesn’t mind nibbling on the corpse of a murder victim to figure out whodunit, and why. He’s been brought on by the Special Crimes Division of the FDA, the most powerful law enforcement agency on the planet, to investigate their strangest, sickest, and most bizarre cases.

When another friend told me about this and offered to loan it to me, I jumped on the chance! The synopsis reminds me of what I’ve heard about iZombie, which I’ve never seen, but it seems like an interesting premise, but a little darker than the mangas on this list. 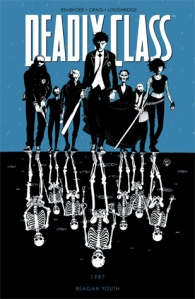 It’s 1987. Marcus Lopez hates school. His grades suck. The jocks are hassling his friends. He can’t focus in class. But the jocks are the children of Joseph Stalin’s top assassin, the teachers are members of an ancient league of assassins, the class he’s failing is “Dismemberment 101,” and his crush has a double-digit body count. Welcome to the most brutal high school on earth, where the world’s top crime families send the next generation of assassins to be trained. Murder is an art. Killing is a craft. At Kings Dominion School for the Deadly Arts, the dagger in your back isn’t always metaphorical.

I have this on loan from the same friend as the other graphic novel and I was sold as soon as he said assassin school. I used to love a series about a spy school when I was younger so I could see myself really getting into this. 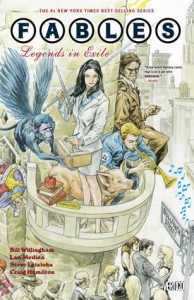 When a savage creature known only as the Adversary conquered the fabled lands of legends and fairy tales, all of the infamous inhabitants of folklore were forced into exile. Disguised among the “mundys,” their name for normal citizens of modern-day New York, these magical characters created their own secret society that they call Fabletown. From their exclusive luxury apartment buildings on Manhattan’s Upper West Side, these creatures of legend must fight for their survival in the new world.

I actually started playing the game that is based on this graphic novel a few years ago so I know I’ll like it! I have this out on loan from the same friend as the last one mentioned.

As I said, I’ll be slowly working my way through these between bigger reads to give myself a little refresher! I’m especially excited to read graphic novels from the publisher, Image because I tend to like the more non-mainstream graphic novels. Two of the graphic novels (Chew and Deadly Class)  mentioned in this post just so happen to be from Image so that’s exciting! From the mangas I’m hoping for adventure and friendships and from the graphic novels, I’m hoping to find darker reads with  anti-heroes!

Thanks for reading! -xo Amber

Is it a graphic novel or comic; is there a difference? Have you read any of these? Do you have a favorite graphic novel, comic, or manga to reccommend to me? Leave me a comment and let me know what you thought!

If you like my content, please consider supporting me by clicking the link and “buying me a coffee”! ko-fi.com/amberrybooks 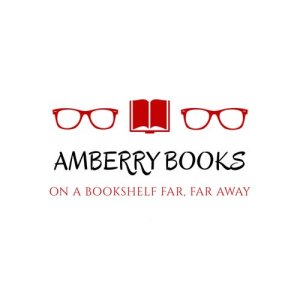 Born in the midwest of the U.S. of A., I graduated from my university with a BA in Foreign Language and Literature: German. Now, having moved across the ocean, away from my family and the country I called Home, I'm a graduate student studying for my MA in Media Translation (English/German) in Hanover, Germany. In the meantime, I spend all other available time reading and singing to myself. Let's have some fun! To contact me: amberrybooks@gmail.com View all posts by amberry books